Over the past three decades, China’s remarkable economic growth has raised hundreds of millions of people out of poverty and improved living standards on a scale unrivaled in economic history. This rapid expansion in energy and the dramatic growth it has fueled has transformed the country into one of the world’s most important economic powers. It has also, however, had profound environmental consequences. Chinese citizens breathe some of the world’s most polluted air, leading to serious health problems and shortened lives. China has also become the world’s largest emitter of carbon dioxide, making it critical to global efforts to mitigate climate change.

Chinese policymakers have begun implementing an ambitious agenda to address these challenges. Since 2013, China has made incredible progress in its “war on pollution,” with particulate pollution levels dropping by 20 to 40 percent in major cities. Yet, as policymakers continue to work toward additional improvements that produce cleaner air, water, and soil without sacrificing economic growth, it will be crucial to identify the most cost effective and efficient policies available.

EPIC has developed a successful model for addressing the world’s most difficult energy and environmental challenges. At its core, the EPIC model focuses on producing data driven, tested research insights in partnership with local, regional, and national governments. Our process helps ensure that the right questions are being asked, solutions are tested on the ground and rigorously measured, and results can be scaled up into successful policies. EPIC is committed to working with governments in the regions and countries of the world that are at the center of these critical issues, including in China.

“EPIC-China takes the established research and existing partnerships of UChicago faculty to the next level. Alongside our Chinese partners, our aim is to conduct ground-breaking research on how to ensure access to inexpensive and reliable energy while meeting China’s ambitious pollution-reduction goals. This work could bring long-lasting benefits not just to China, but also to the rest of the world.” 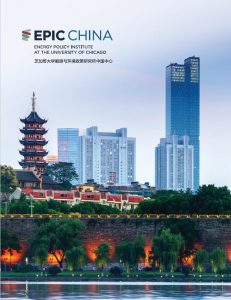 The University of Chicago and the University of the Chinese Academy of Sciences (UCAS) have formed a groundbreaking collaboration that will support a wide range of research focused on energy and environmental issues and policies.
Learn More

The Becker Friedman Institute for Economics (BFI) serves as a hub for cutting-edge analysis and research across the entire University of Chicago economics community, uniting researchers from the Booth School of Business, the Kenneth C. Griffin Department of Economics, the Harris School of Public Policy, and the Law School in an unparalleled effort to uncover new ways of thinking about economics. As part of the broader Chicago Economics community, EPIC is an affiliated center of BFI. Working in close partnership with Chinese researchers and research institutions, BFI-China aims to develop new insights on the critical economic issues facing Chinese policymakers today.
Learn More